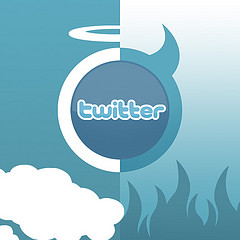 Twitter is a powerful social media platform that connects users from across the globe in realtime. A fun way to keep in touch with friends and celebrities, Twitter can also be used as a productive marketing tool. You can keep tabs on the Royal Baby while simultaneously telling the world that you’ve got a brand-new novel up for sale! Check out our list of Twitter pros and cons, and decide for yourself if Twitter is right for you.

PROS: Reasons Twitter Is A Fabulous Reputation-Building Tool For Writers

CONS: Reasons Why Twitter Is More Trouble Than It’s Worth For Some Writers

Twitter For Writers: What You Put In Is What You Get Out

Twitter is a powerful and productive social media platform that can not only increase your reach as an industry influencer, but also publicize your author persona and author website. After learning the major pros and cons of the social media platform, how will you answer the timeless question below: To tweet or not to tweet?